A recent post on Hackaday inspired me to build my own wooden Dymaxion globe. But instead of fixing the parts together, I decided to make it foldable.

In the 1940ies, architect and inventor Buckminster Fuller invented the Dymaxion map: A world map created by mapping the globe onto an icosahedron and then unfolding its 20 faces:

Compared with other prominent map projections like the Mercator projection, the Dymaxion map shows far less distortion especially around the polar regions. Also the icosahedron can be unfolded in different ways, leading to maps emphasizing varying aspects of the globe.

Recently, Hackaday featured a blog post by Gavin Smith where he describes building a lasercut version of the Dymaxion globe, with wooden faces fixed together using 3D printed vertices: 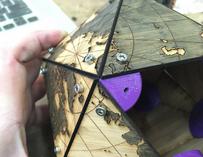 I really liked this project, so I decided to make my own. I used the lasercutter at Happylab to cut a first prototype. Because I was in a hurry I had to leave out engraving the continents, also there are two oversized pieces where I accidentally deleted the cut line while preparing the file for the lasercutter: 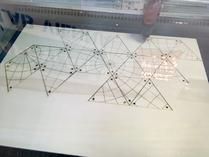 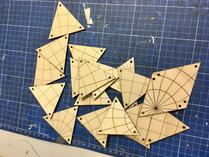 Playing around with the cut parts I started to wonder: Would it be possible to make the globe foldable? After all this would you give you one single object that is both the globe and the map at the same time – a perfect representation of the idea behind the Dymaxion map.

How to Build Hinges?

To make the globe foldable I would need hinges. The hinges should not only provide a sturdy connection between two neighbouring faces, but they should also restrict the angle between the faces to a range between 138° and 180°1.

I briefly thought about modelling such hinges from scratch for 3d printing, but that would have taken quite some time and I wanted to finish the globe before xmas. So I kept looking for a simpler solution.

Why not just use gaffer tape2? To restrict the angle between adjacent faces I could quickly 3d print a few small prisms to be used as stoppers. Add tiny neodymium magnets3 to keep folded faces in place, and voilà – this should work! I decided to give it a try: 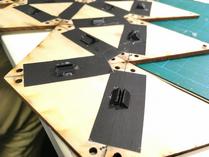 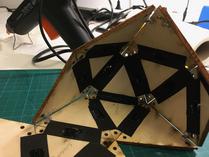 So I decided to rework the design of the stoppers. And I designed an additional part to solve the “magnet placement” problem: It looks similar to the first stopper design and is used to keep the magnets at the correct angle and position to ensure they touch flatly when the globe is folded up, resulting in a firm connection and no gap between the faces. 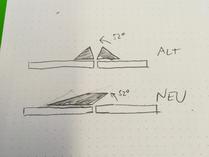 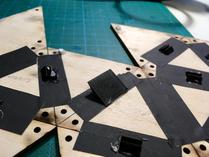 The newly designed magnet holders turned out to work very well (note the satisfying “clunk” when the magnets connect):

Not only do these magnet holders look similar to the initial stopper design, they also work like stoppers. So I decided to ditch use the “real” stoppers only on the inner edges.

Now being confident that everything would work out as expected I started making the final version of the globe: 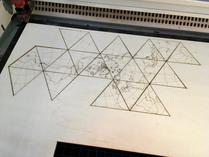 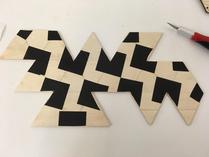 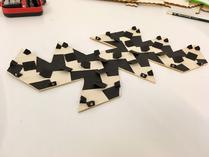 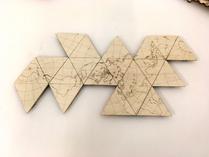 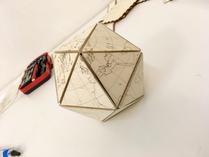 And that’s it! I’m very happy with the final result, it folds up almost automagically and the folded globe is nice and sturdy. You can even (carefully) throw it around!

Unfolding the globe is a bit tricky: You have to find one of the corners where there is no hinge and then peel it apart one face at a time, breaking up the strong magnetic connections. But with a bit of practice this can be done easily, too.

Here are all the files you need if you want to make your own foldable Dymaxion globe:

Thank you! We’ll notify you as soon as your comment gets published.
0010Audiokassetten als DatenspeicherImproving my sd2iec’s Power Connector0012