When I originally built the sd2iec for my C128, I improvised a simple power connector for the cassette port. It worked, but felt kind of wonky. Time to improve!

The C64/C128 has a cassette port implemented as 6-pin edge connector1. Two of the pins are connected to 5V and GND, and these can be used to power the sd2iec.

I didn’t have a suitable edge connector when I built my sd2iec, so I created a simple power connector out of some spare parts. It did work quite well, but in the meantime I got hold of a 1530 datasette2 with an original cassette port edge connector: Time to make a real connector for the sd2iec!

However, I want to keep using the datasette in the future, too. So instead of simply cutting off its connector and soldering it onto the sd2iec power cable, I decided to go with a more modular approach: Build some kind of adaptor with the cassette port edge connector on one end and some kind of standard female plug on the other end. If I then soldered matching male plugs to both the datasette and the sd2iec, I could use the adaptor with either of them.

Side note: Some time ago I also acquired a 1531 datasette3. It’s almost identical to the datasette for the C64/C128, but instead of the edge connector it features a Mini-DIN-7 connector. With a suitable adaptor it can be used with the C64/128, too.

Here are some photos and the wiring diagram for the adaptor: 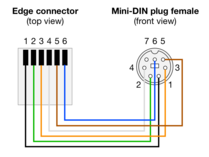 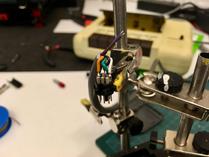 Thank you! We’ll notify you as soon as your comment gets published.
0011A Foldable Dymaxion GlobeDesigning and Printing a Battery Dispenser0013