For playing shop, the toddlers had got a tiny pizza box. An empty one. Time to build a toy pizza!

Now what would a pizza be worth if it wasn’t divisible into pizza slices? So a pizza puzzle it had to be. To keep things simple – both for me while designing, and for the toddlers when playing – I set out to create a pizza made out of six identical, interlocking slices1: 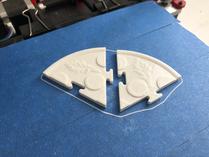 As usual I had been far too optimistic regarding the required clearance measures at first, and so the initially printed slices, while looking beautiful, were impossible to connect to each other2.

For the next try I considerably increased the clearances and also redesigned the interlocking bits, changing them from being smoothly curved to a rather angular design (which was a lot easier to deal with while using the “offset” feature in Fusion 360 to get the required clearance). With these changes in place, the slices fit perfectly:

White pizza is rather uncommon, so some coloring was needed. After preparing the printed parts3 with plastic primer (affiliate link), I used simple acrylic paint in yellow, red, and green to make the pizza … well, still not at all realistic, but at least less monochromatic: 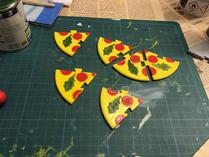 Turns out the rather loose fit of the slices was a perfect match for the dexterity of the toddlers (2 and 3 years): If assembling the pizza would require more force and/or exactness I’m quite sure they wouldn’t make it – or at least lose interest before having managed it. Also, having different slices that only could be assembled in one specific way4 would be asking too much of them at the moment. But with its loose fit and identical slices, the toddlers have a lot of fun piecing together the pizza, both inside and outside its pizza box. 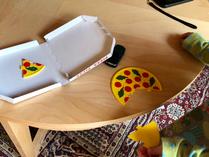 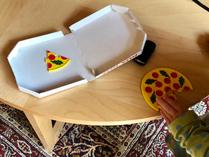 If you want to print your own, get the STL file from Thingiverse.

To change or improve the design, download the orginal design file (Fusion 360).

Thank you! We’ll notify you as soon as your comment gets published.
0017The LichtspielBuilding a Faux Neon Sign Using LED Strips (Part 1)0019