I want to build a car racing game. In hardware. Using an ancient dot matrix printer. Part one of a – probably – longer series of posts. 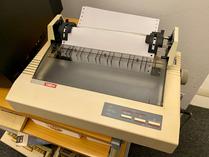 Recently I got hold of a dot matrix printer1 for my Commodore 64. Of course I had to try it out using continuous form paper (I got some of that, too).

Besides its age the printer worked flawlessly. Seeing the printed lines rushing by one-by-one, with the print head moving along, I got the idea of creating a car racing game: The printer would generate the track by printing its left and right boundary line by line, and on top of the printer there’d be an apparatus holding a tiny car made from cardboard so that it can be moved to the left and to the right.

But first, I had to concern myself with creating a pun in hardware:

In German, continuous form paper is called “Endlospapier“ (“infinite paper”). So the second thing I tried (after having – successfully – tried to make the printer work) was to create an infinite loop of “infinite paper”. Turns out this works quite well: 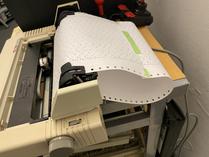 End of digression. (However, I might even use this idea in the game, creating a race track that repeats itself after two sheets of paper. Think of driving several rounds on a real race track.)

To make the tiny car move along my current plan is to have a stepper motor with a drive pulley on one side, an idler pulley on the opposite side, and a loop of string in between. And the car fixed to the string.

I started with a small (and cheap) stepper motor that I had already laying around2. Add two 3d printed pulleys, a piece of chipboard from the junk pile, and a good handful of screws – voilà, there is prototype one. 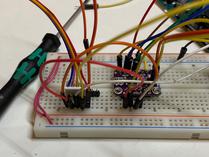 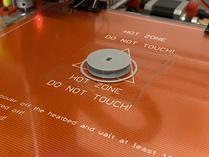 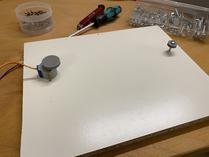 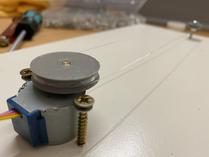 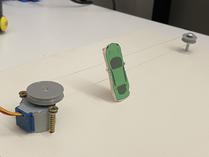 This particular stepper motor has a 1:64 gearbox built in. Means it has quite a lot of torque for its size, but the pulley won’t turn very fast. This is about the maximum speed I was able to achieve:

Thank you! We’ll notify you as soon as your comment gets published.
0022Transforming a Vintage Rotary Phone Into a JukeboxMatrix Grand Prix (Part 2)0024